As much as it is difficult to afford a good life in the present era, it’s even harder to pay the price of death.

The passing of a loved one not only comes with emotional agony but can also be financially distressing for families. Therefore, it is essential to know how much funeral rites in your state or city cost? To know that, you first need to choose between a burial or cremation since the cost of both varies significantly.

Funeral vs Cremation Costs in Arizona

Many families are now choosing the option of cremation as it is cheaper and more affordable. According to the National Funeral Directors Association (NFDA) 2021 Consumer and Preferences Report, the estimated cremation rate is 57.5%, while the estimated burial rate is around 36.6%.

These statistics show that cremation is now a popular choice among people, and fewer people choose the option of burial. Since the global pandemic, the cremation rate has widely increased in the U.S. The NFDA also predicts that the cremation rate in all 50 U.S states and Washington D.C will exceed 50% by 2035.

The same is the case in the state of Arizona; according to NFDA, the cremation rate in Arizona has surged up to 68 percent, but what is the average cremation cost in Arizona? Local experts say that it costs less to die in Arizona as they pay less for funeral costs than the rest of the nation since many families choose cremation over traditional burial.

To understand the average cost of cremation in Arizona, below is an overview of the 3 biggest cities of Arizona. 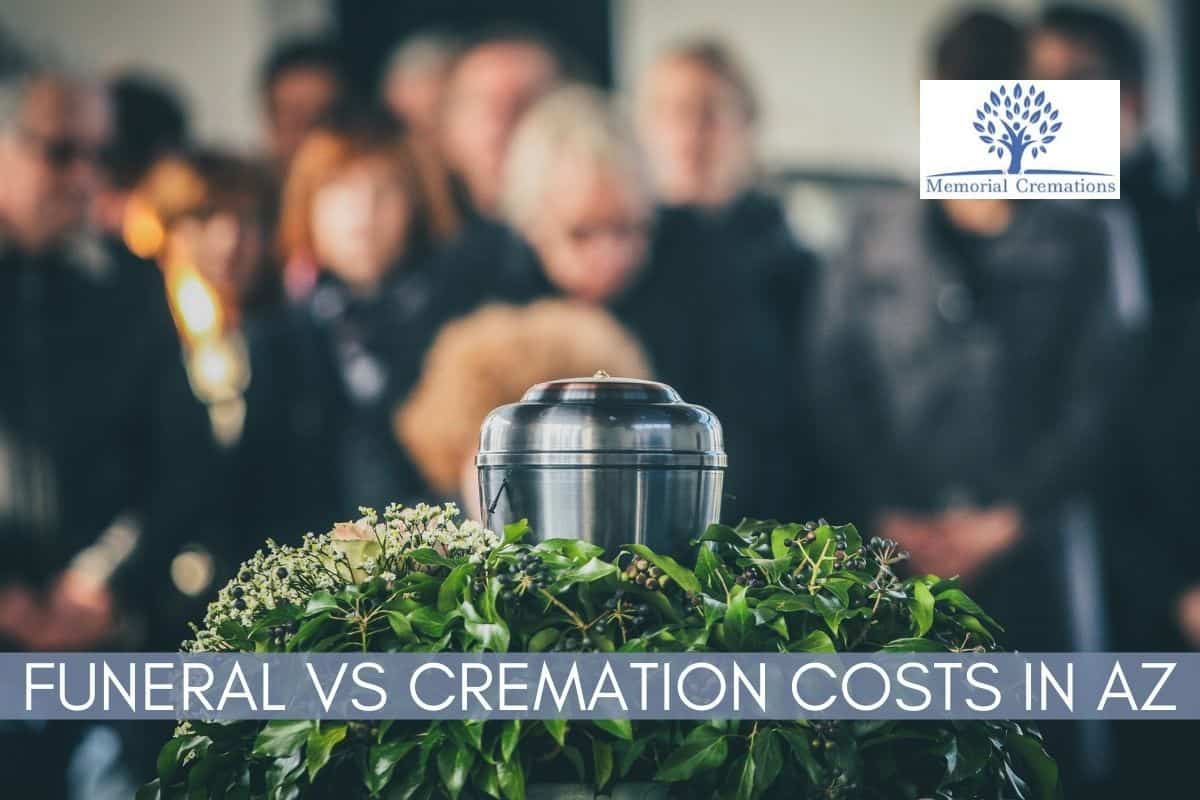 Since Phoenix is the largest city, it holds a significant value among the state. Therefore, it is vital to dig deeper and have a detailed overview of the costs. To know the cost of cremation, you first need to have an insight into the funeral costs of the city. Here’s a quick look at how much does a funeral cost in Phoenix:

Cost of a Funeral in Phoenix: Since all the funerals are not performed the same way, the funeral price in Phoenix varies considerably depending upon the service provider and the type of service you choose.

A typical burial service includes viewing, ceremony, professional services, and a standard casket. According to the National Funeral Directors Association, it makes up to an average funeral cost of about $9,000, excluding cemetery fees and cash items.

However, traditional burial is easily arranged within half of this cost if you select an affordable service provider. Whereas a traditional funeral can cost up to $4,195 with no cemetery fee included, people opt for a cheaper and more economical cremation option.

Cost of Cremation in Phoenix: Since cremation does not require a cemetery fee, embalming, a casket, and other services expense, it is more cost-effective and pocket-friendly than a traditional burial. It has become a preferred choice for many families. It costs only a fraction of a burial; if we talk about Phoenix, it’s much likely that you can save up to 75 percent of the cost of a traditional burial.

The average cost usually varies on funeral homes and cremation services and depends on where you’re located and the services included in the package. According to the Cremation Association of North America (CANA), the national average cost of cremation is $2,250. In contrast, a simple cremation in Phoenix costs around $600 to over $3,000, varying from where you live.

Tucson is the second biggest city in Arizona, with a population of around 500,000. A competitive cremation rate in Tucson has helped bring the cremation cost down in Arizona. The cremation rate of Arizona is the highest among all the states of the U.S as families find cremation to be a cheaper option.

Cost of a Funeral in Tucson: The cost of a funeral varies significantly from cremation cost in Tucson.

While the national average funeral cost costs around $10,000 or more, the cremation cost can make an average of about $3,000 to $4,000, depending upon your location. With an increasingly expensive funeral cost in the U.S and big cities like Tucson, families have adapted cremation as it is not heavy on the pocket.

Cost of Cremation in Tucson: The prices in the city of Tucson also depend on the logistics and service providers of cremation.

Usually, providers charge additional cash for a certificate of death and state findings that adds up as a hidden cost without the knowledge of the family. Keep a keen check when booking a service provider and ensure what the package includes to compare the price between various cremation offers.

The cost options in Tucson are relatively affordable, from $550 up to $995, making it one of the cheapest cremation costs in Arizona. 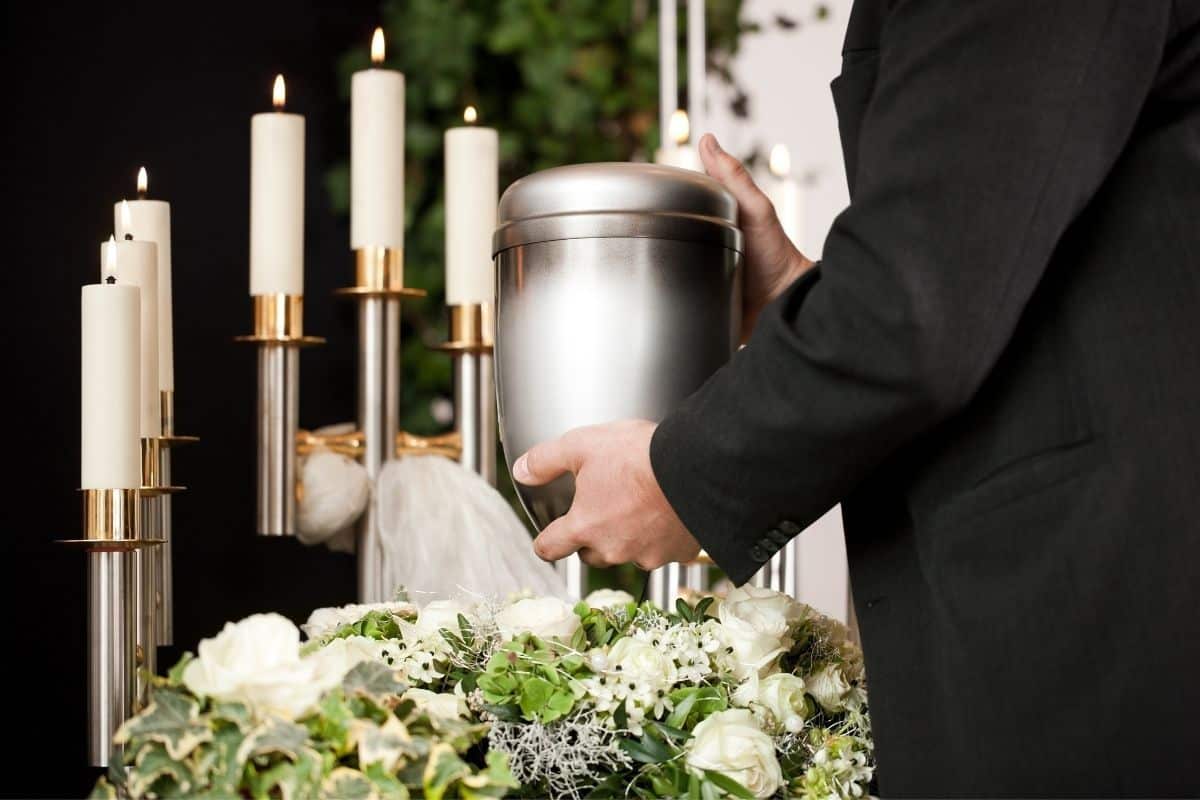 With Mesa being the third-largest city in Arizona, it has a considerably higher cremation cost than the other two cities. The average price of a funeral remains the same all over the region. However, the cremation cost depends on your locality and service providers according to the city.

Cost of a Funeral in Mesa: Similar to other cities, funeral costs in Mesa are effectively high as well, due to which families now prefer cremation to be an economical option.

The price rate keeps increasing, whereas the overall funeral rate has declined over time. A traditional funeral in Mesa costs $5,821 with no cemetery fee included, making it an expensive choice for the families to opt for.

Cost of Cremation in Mesa: Cremation is the popular choice among families as it is cost-effective and easy to afford. It can save about 40 to 60 percent compared to a traditional funeral cost.

The average cremation cost in Tucson is $1,232. However, it can vary depending upon the type of service, but if you choose direct cremation, it can cost you cheaper, around $925.

Funeral costs all over the U.S have touched the sky in the past years, and families now prefer cremation. According to the National Funeral Directors Association, the cremation rate has significantly surpassed the funeral rate.

With Arizona being one of the top states to have a cremation rate of up to 68%, the costs also considerably vary from one state to another. To estimate the average cremation cost in Arizona, the overview mentioned above of its 3 biggest cities will help you understand the average price compared to other states.

link to 10 Things to Do With Ashes After Cremation

A loved one passing away is devastating and planning a funeral can be overwhelming as well. If the body is cremated, you have to decide what to do with the remains. There are many different, unique,...

Continue Reading
link to Mausoleums and Everything You Need to Know

There are noble mausoleums rooted for centuries in retired glades of parks, among the growing timber and the fern.. Charles Dickens Introduction Mausoleums are often connected to the Gothic Age,...

All of us here at Memorial Cremations love helping families and pet owners remember their loved ones. We have each lost dear ones and know how to help you through the cremation or memorial process. It means a lot to each of us that you are reading our insights. Please let us know if we can help you with anything at all.

Memorial Cremations is a participant in the Amazon Services LLC Associates Program, an affiliate advertising program designed to provide a means for sites to earn advertising fees by advertising and linking to Amazon.com. Thank you so much for reading as this helps us bring fresh content to you and keep this site going!